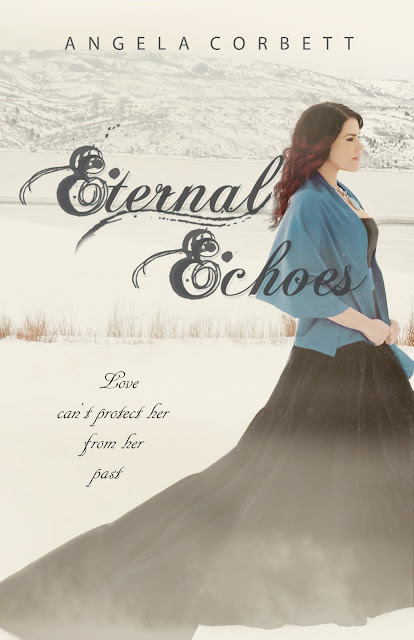 I LOVE this cover SO much! I hope you think it's as gorgeous as I do!

My wonderful friend and fantastic blogger, Jean at Jeanbooknerd.com, was nice enough to do the reveal for me.

HUGE thanks to my amazing photographer, Lani Woodland; talented designer, Alma Tait; and my gorgeous cover model, Adrie Buchanan, who had to wear a strapless gown in temperatures below 20 degrees while it was snowing to get the photos. Also, big thanks to my mom who used her seamstress magic to make the beautiful wrap and belt for the dress after I gave her this super helpful description: "I need them to be blue. Dark blue. And maybe 2 or 3 feet long." Love you, Mom! 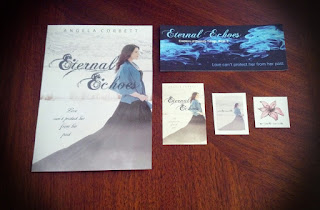 Eternal Echoes is on Goodreads with the cover and the summary, so add it here!

Also, Eternal Starling will be free on Kindle today and tomorrow. If you're a Kindle reader, grab it!

Hugs to you all!
Posted by Angela Corbett at 1:32 AM 8 comments:

The Eternal Echoes cover reveal isn't until Tuesday, but I have something else for you today!

Have a fantastic weekend!

She thought she stopped the evil.

She thought she was safe.

Everything she thought was wrong.

Almost four months have passed since Evie Starling learned she was a Tracker and helped defeat a Daevos Clan that was taking others like her—but that wasn’t the end of the abductions. As an unknown evil emerges, Evie vows to help solve the mystery of the missing Trackers, regardless of the risk.

While she attempts to balance her life with the dangers constantly present, another threat surfaces. A strange sickness is crippling those around her, and Evie can’t help wondering if she’s somehow the cause.

With new powers she doesn’t understand and can’t control, she turns to Alex and Emil, her two soul mates, for help. But her feelings for them both are tearing her apart. She knows she has to decide between them; however, her memories are only making that choice more difficult.

As the world around her is thrown into chaos, Evie is confronted with what could be a destiny-altering truth. Will she accept her history, her memories, and her role in this life, or choose to ignore the echoes of her past?