The Problem with Love Squares 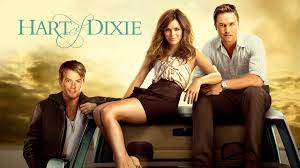 I admit it. I like Hart of Dixie. It's one of those shows I refuse to watch with my husband around because he can't go 30 seconds without mocking it. Honestly. He tried, and almost burst a blood vessel after 2 minutes. The show is silly, fun, and a guilty pleasure that usually doesn't require me to think or scream at my TV.

If you're a fan of the show and haven't seen the season 2 finale, stop reading now.

There will be spoilers.

Before I get into that, I'll give you a little insider info. about The Devil Drinks Coffee. When I was going through revisions, I was working with a couple of literary agents. My main character, Kate, is single in the book. At that point in the revisions, I'd decided there was no reason for Kate to be stuck with just one or two love interests. Why not have 3 and instead of a love triangle, I could have a love square! I really liked the idea and the future series plot development surrounding it...and so did most of my betas when they were reading for me. But when the agents got a hold of the book, they both commented that my love square was one too many love interests. That the reader wouldn't know which guy to root for because they were being pulled in so many directions. Now don't get me wrong, there are books with love squares...there are books with love octagons...hello, Laurell K. Hamilton anyone??? But, I saw the agents' point of view, and made the changes. I think the book is stronger for it. What does this have to do with Hart of Dixie you ask?

Well, Zoe is now the corner of a love square. I'm not sure who to root for, and I'm actually kind of pissed because I've been waiting for Zoe and George to get a chance FOREVER! Now I'm left for 3 months wondering if she's going to pick one of the original love triangle members, or go with Jonah Breeland (who shall now be referred to as "New Yahoo"). I realize the intention was to show that Zoe picked herself over the two guys. I would have totally accepted and loved that plan, but then New Yahoo showed up, expressed interest in Zoe, and stalked her to her friend's wedding.

If she ends up with New Yahoo, I will be displeased. Very, very displeased.

So, any Hart of Dixie fans out there? Are you Team Wade, George, or New Yahoo? And what did you think of the finale?