If you read the acknowledgments of Eternal Starling, you might have seen a sentence that reads, "To my brother, Colten, and sister, Natasha, thank you for your optimism, and for teaching me long ago that absolutely nothing is impossible." I haven't really talked about this in the past, but I'm hoping my friends can help make the impossible happen again.

Colten and Natasha were both born with a very rare syndrome called Peters Anomaly Plus syndrome. There are a lot of problems that come with Peter's Anomaly Plus, including: speech impediments; hearing problems; dwarfism; and the biggest issue, they were born blind.

In this news story from 1985, Ed Yeates from KSL News, and Colten and Natasha's doctor, Alan Crandall, explain Peters Plus much better than I can.


Colten was born after me, and was one of the first people in the world to be diagnosed with Peters Anomaly Plus. Doctors had no idea how to treat him, so they told my parents to put him in a hospital and wait for him to die. They said he'd never have normal brain function, never see, never be able to ride a bike, or go to school, and there was nothing that could be done. My parents wouldn't accept that. They searched all over the world for a doctor willing to treat Colten, and finally found one in Salt Lake City, UT, only 90 miles from our house--a miracle in and of itself.

Their doctor said he thought he could give Colten eyesight, but the surgeries Colten would need hadn't been done before, and they didn't know if it would work, especially on a baby. After several surgeries, they were able to save one of Colten's eyes. The doctors thought Colten's problem was the result of a chromosome translocation. They did genetic testing and said there was no way my parents would have another child with Peters Anomaly Plus. Then Natasha was born, and she had Peters Anomaly too. Because of the research they'd already done on Colten, they were able to save both of Natasha's eyes. Together, they've had over 85 surgeries. They did learn to ride a bike, they both graduated from high school, and then they graduated from college. It wasn't an easy road, but they've never given up, and their positive outlook on life always amazes me. They've done the impossible over and over again.

Though Colten and Natasha's vision has never been perfect, they've both been able to see...until a few weeks ago. Natasha's eye pressure went too high and she had to have emergency surgery. The recovery from the surgery didn't go as expected, and she had a reaction to the medication she was taking. She is now completely blind. Her doctors are hopeful that she'll get her vision back, but the next month is critical.

The fact is, we don't know what will happen right now. I refuse to believe that after everything Natasha has been through, that she's going to lose her sight now. When they were young, my mom and dad's community rallied around them. I think that support was part of the reason Colten and Natasha have done so well. So, I'm asking for my community to help too. I truly believe in the power of positive energy and thought, so if you have any to spare, please send it Natasha's way.

Whew!!! I just got back from a trip where I was having a lot of fun with my best friend, and doing a little research for Eternal Starling book 2! :) The trip helped with some details I needed to figure out, and I think it's all going to work. *evil laugh* :)

Thanks to everyone who participated in the Intrinsical and Witch Song giveaway on my blog! If you entered to win Eternal Starling on Lani and Amber's blogs, thanks for that too!

So, I have two signings coming up that I want to let you know about!


The staff at Hastings has been great, and I'm excited to do another signing in Logan! I'm signing with Amber Argyle and Shadow Stephens, so stop and see me! 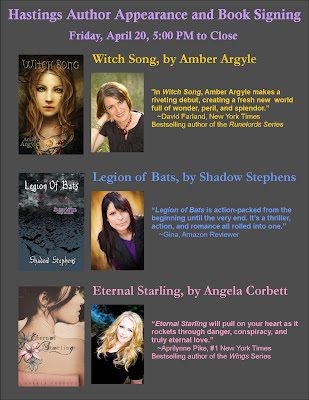 I'm so excited I get to sign at one of my favorite bookstores again! I also had my Eternal Starling launch party there, and it's a fabulous store!

I'm signing with Lani Woodland (author of Intrinsical and Indelible), and Dan Haring (author of Oldsoul). We'll be speaking a bit, answering questions, and then signing until you get sick of us, or the store closes. :) So stop by and say hello!

The YA Scavenger Hunt is over! A list of winners is posted here! It was so much fun to be part of the Hunt again, and I hope you all had the chance to learn about new authors and their books!

In case you didn't get the chance to read the Eternal Starling deleted scene on the Scavenger Hunt, I've posted it below. Happy reading! :)